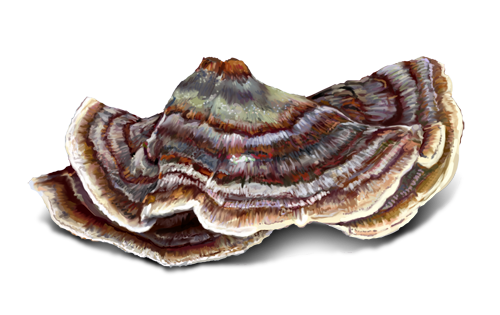 Many mycophiles consider the turkey tail mushroom as one of the most beautiful mushrooms in the world. Though you may often find these fungi on the forest floor by a dead tree, Turkey Tail mushrooms are mainly fascinating due to their color and the visible presence of a layering of the ?conk.? The scientific name of this fan-like fungus is Trametes Versicolor, and they are also known as Polyporus Versicolor and Coriolus Versicolor. Turkey Tail mushrooms are widely loved for their health and therapeutic benefits. They have been used in traditional medicine for 1,000’s years and have only recently been introduced to the mainstream nutraceutical market. Turkey Tail medicinal mushrooms are part of a growing number of mushrooms being used in dietary supplements to help specific health conditions and prevent disease. Thanks to recent research we are all now benefiting from the power of medicinal mushrooms on a daily basis! It’s no longer considered a traditional or ancient Asian natural medication, mushrooms are now widely recognized as?being beneficial to your health and general well-being!

From the name Versicolor, you can distinguish the mushroom from other fungi by its multicolor characteristic that predominantly falls within the brown, red, cinnamon range of colors, though there are some as varied as blue and green. They are, after all, so named for their variety of colors. This fungus is also commonly called Turkey Tail because their colors are like turkey plume feathers. This mushroom is also known in Japan as ‘kawaritake,’ which translates to ?cloud mushrooms.? In China, Turkey Tails are called Yun Zhi, which also means ?cloud mushrooms.? The mushrooms are called as such since they evoke a picture of swirling clouds. In different Asian cultures, these cloud forms are said to symbolize good health, longevity, and spiritual attunement. But what kind of power do Turkey Tail medicinal mushrooms possess exactly?

There are many benefits of Turkey Tail Medicinal Mushrooms

Turkey Tail Mushrooms Correct Immune Deficiencies
The National Institute of Health (NIH) funded a $2 million clinical study, which the University of Minnesota together with Bastyr University conducted for seven years. The study aimed to determine whether or not Trametes Versicolor or Turkey Tail medicinal mushrooms could positively cause the immune system of women with stage I-III breast cancer to rebound after their radiation therapies have ended. The result of their study showed that Turkey Tail medicinal mushrooms have in fact dramatically boosted the immune function of the participating cancer patients. When taken in freeze-dried form, researchers recorded significant results concerning the immune system, which gave them a reason to think of a possibility in shrinking tumors.

We can measure a person?s immunity through the number of lymphocyte cells, also known as natural killer (NK) cells, present in the body and by how active these cells are in killing tumor cells or virus-infected cells. The immunity of a cancer patient often declines dramatically after every session of radiotherapy. To be able to say that the immune system or general health of a cancer patient has improved, the NK cell count should increase at a rate that will let them attack successfully attack the majority of remaining cancer cells.

The researchers of the study funded by NIH hypothesized that the women with breast cancer would have an improved health with the help of Turkey Tail mushrooms. After trials, and with evidence that the NK cell count increased, the researchers initially published a journal suggesting that Turkey Tail mushrooms can supplement mainstream chemotherapeutic medicine and radiation therapies.

The result of the study only confirmed what we have long been believed in history as an effective therapeutic use of Turkey Tail medicinal mushrooms. Due to this, preparing and packaging Turkey Tail mushrooms as a patented immunotherapy drug is unlikely to happen. This has positively deterred big pharmaceutical companies from funding costly clinical trials for the development of a patented drug. Hence, NIH formed the National Center for Complementary and Alternative Medicine (NCCAM) to fund and oversee research such as this, those that study the efficacy of natural products as drugs.

The connection between a virus and cancer, which previous research studies have mapped out, is precisely where the medicinal purposes of mushrooms like turkey tails are vital and needed. Having identified the gap in research and the possible medicinal use of mushrooms, researchers have aimed at lessening the chances of getting cancer by addressing factors like oncoviruses.

Other Known Health Benefits of Turkey Tail Mushrooms
As discussed earlier in the article, Asians have long been using turkey tails to boost a person?s immune system. In China and Japan, some of the other benefits that turkey tail mushrooms are known for are the following:

Turkey Tail Mushrooms – To Cook or To Supplement?
As mentioned earlier, turkey tails are among those natural medicines used by our ancestors to treat particular ailments and diseases. Traditionally, these mushrooms are boiled in water to serve as therapeutic tea. Cooking the mushrooms serve some purposes namely to kill contaminants, soften the flesh, and extract the soluble polysaccharides more commonly known as complex carbohydrates.

Mycelium make up all mushrooms. These appear as densely-compacted cobweb-like cells. It?s the large-scale production of these cells that enabled modern laboratories to bring about new methods of medicinal preparations. The commercial production of mycelium, when compared to traditional preparations of mushrooms, provide what people consider as a more digestible and uncontaminated product. In addition to this, researchers and mycophiles continue to discover compounds in mushrooms like Turkey Tail that they cannot find when preparing the fruiting bodies traditionally. Remarkably, these novel compounds can only be detected when there is a rapid growth of mycelium.