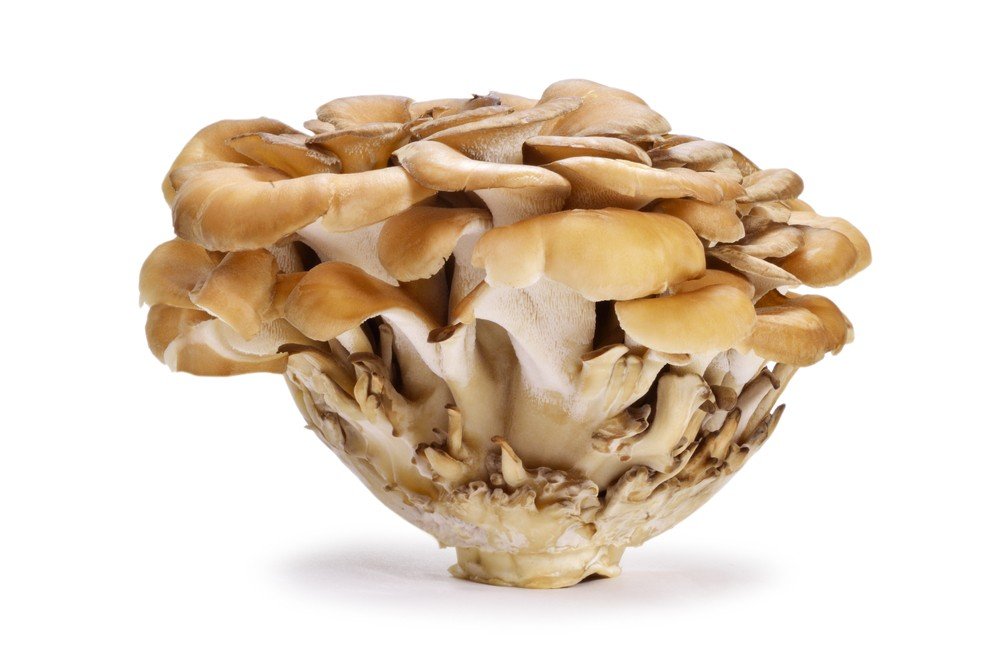 Similar to Turkey Tail and Reishi mushrooms, the Maitake mushroom were long used in Asia as a potent medicinal food. The Maitake only gained attention in American soil in the past twenty years and is now a popular choice of mushroom for those looking to enhance their lifestyle and well-being naturally. There are many medicinal mushrooms available as dietary supplements and while they can still be consumed naturally in cooking, it is often just as beneficial to take a dietary supplement and know that you are getting enough of the mushroom each day to cause an effect. Maitake medicinal mushrooms are often found in dietary supplement focusing on Immune Defense and Memory Improvement. Just 100mg a day can be enough to feel the benefits.

Its Japanese name translates to ?dancing mushroom? although it is also known as ?king of mushrooms,? ?sheep?s head,? and ?hen of the woods.? Its scientific name Grifola frondosa refers to the mythical creature Griffin that has the body, hind legs, and tail of a lion together with the wings, head, and talons of an eagle as its front legs.

Another popular name for the Maitake mushroom is ?the dancing mushroom,” which is based on a popular Japanese legend that tells the story of a group of Buddhist nuns and woodcutters who met on a mountain trail. While on that trail, they unearthed the fruiting of Maitake mushrooms, which they saw coming out of the forest floor. They rejoiced at having discovered an unusual kind of delicious mushrooms, and so they danced in celebration.

Maitake mushrooms are a polypore mushroom found in clusters at the base of trees, mainly oaks and less commonly on maples and elms. As a polypore, the Maitake mushroom has no lamellae or gills located under the cap of most mushroom species. Instead, they release spores through their hymenophore surface that is grayish in color when the specimen is younger. This pore surface becomes whiter with age and will eventually turn a shade of yellow or brown once the mushroom passes its peak.

When and where to harvest them
You can pick Maitake mushrooms from mature oaks, maples, and elms that have dying branches. These fungi often grow from the start of September until around end of November. If you try to look in natural parks, lawns, in other forested locations, or even those areas with dead stumps, you may be lucky enough to harvest some Maitake mushrooms. These mushrooms often grow in the same places for a number years. So if you?ve previously found them on a particular tree, try looking at the same location the following year and you just might some again. Since Maitake mushrooms have become a popular medicinal mushroom supplement they are now cleverly cultivated across the world so nutraceutical companies can use them in dietary supplements at ease and not have to travel across the world to harvest them. Maitake Medicinal mushrooms are even grown in the USA!

Cooking and Eating?Maitake Mushrooms
Mycophiles consider the Maitake as one of the most, if not the most, versatile mushrooms ever found. Food critics have described the flavor of Maitake as distinct, yet it does not overwhelm nor is it simply overpowered. Food lovers enjoy Maitake?mushrooms when saut?ed, deep fried, baked, boiled, dried, or microwaved. No matter how it?s cooked, the Maitake mushroom has a distinctive texture that is crunchy on the outside yet chewy on the inside. You can also either prepare them in a thick batter or enjoy them with a load of good cheese. According to some mushroom enthusiasts, Maitake mushrooms are also best served as duxelles. Here are some good recipes.

Maitake Medicinal Mushrooms -?Properties
Mycophiles, nutritionists, and advocates of alternative health have identified some important medicinal attributes to Maitake mushrooms. There were initial studies that have shown how this particular kind of mushroom modulates a person?s glucose levels, and people may use this as an alternative to limiting the body?s development of Type 2 diabetes.

Diabetes can cause neuropathy, retinal degeneration, and renal disease, which in more dire cases can lead to kidney failure. Around 8 percent of Americans have diabetes, and the rate is also increasing worldwide. With this alarming figures, many people have turned to the medicinal and therapeutic benefits one can get from Maitake medicinal mushrooms.

Despite extensive research on the advantages of consuming Maitake medicinal mushrooms, there is much more left to do for researchers to precisely determine the influence this fungus has on diabetes control in humans. And since our ancestors, or maybe just the Japanese ancestors, have used these mushrooms for medicinal purposes since time immemorial, then any definitive research on their efficacy cannot be patented. Hence, the government or private institutions except corporations will have to provide the needed funding for any research on the fungi?s medicinal benefits.

Maitake Medicinal Mushrooms?-?Treatment for Diabetes
Studies researchers previously conducted have suggested that consuming Maitake mushroom polysaccharides, or those long chains of sugar molecules that make up what we know as complex carbohydrates, will lower people?s blood sugar level, particularly of those with diabetes. And since there is evidence, albeit not enough, for the correlation between the consumption of Maitake mushrooms and the lowering of blood sugar levels, there might be an untoward reaction when people consume at the same time both mushrooms and medications. People might experience an all-time low in their blood sugar level, so it?s best that your healthcare provider adjusts the dosage of your medication.

Maitake Medicinal Mushrooms – Lower Blood Pressure
It is not only sugar levels that Maitake mushrooms can lower. According to a number of studies, these mushrooms can also reduce a person?s blood pressure. Hence, theoretically, those individuals with an already low blood pressure must take the necessary precautions to avoid having an even lower blood pressure.

Maitake Medicinal Mushrooms – Treatment for?PCOS
People also attest to the power of Maitake medicinal mushrooms in treating women with polycystic ovary syndrome, otherwise known as PCOS. Although there is not enough evidence yet, early research showed that the consumption of a particular product called the SX-Fraction distributed by Mushroom Wisdom has a significant relation to the improvement in the ovulation of women whose monthly periods have come to an end due to PCOS. The same study shows that Maitake mushrooms work as a great supplement to the non-steroidal medicine for PCOS called clomiphene. But then, women are warned that there isn?t enough valid information to guarantee their safety when taking Maitake mushroom while pregnant or while breastfeeding their children.

Other Uses of Maitake Mushrooms
A good deal of people has also attested to the use of Maitake mushrooms in providing alternative treatments to cancer. The basis for this assumption is similar in nature with turkey tail mushrooms with the extracts increasing a cancer patient?s natural killer (NK) cells, medically termed as lymphocytes. The increase in NK cells will then lead to the depletion of the remaining cancer-ridden cells or those affected by oncoviruses.

Other people also swear that Maitake mushrooms have helped them get better despite having HIV/AIDS, hepatitis, chronic fatigue syndrome or CFS, high cholesterol, hay fever, or chronic weight loss. However, more evidence is needed to directly attribute any health improvements to the consumption of Maitake medicinal mushrooms.
Maitake mushroom is known in Asia for thousands of years already as a food with medicinal properties. People have continued to consume this amazing fungus to treat a number of illnesses. Treatment of cancer is at the top of the list of benefits of consuming?Maitake medicinal mushrooms, whether it be as a food or in supplement form. Medical care for diabetes also comes next to the mushroom?s function as a supplemental cancer treatment. People also attest to the wonders of this dancing mushroom by using it as an alternative remedy for HIV/AIDS, hepatitis, chronic fatigue syndrome, hay fever, high blood pressure, high cholesterol levels, as well as treatment for infertility due to PCOS.